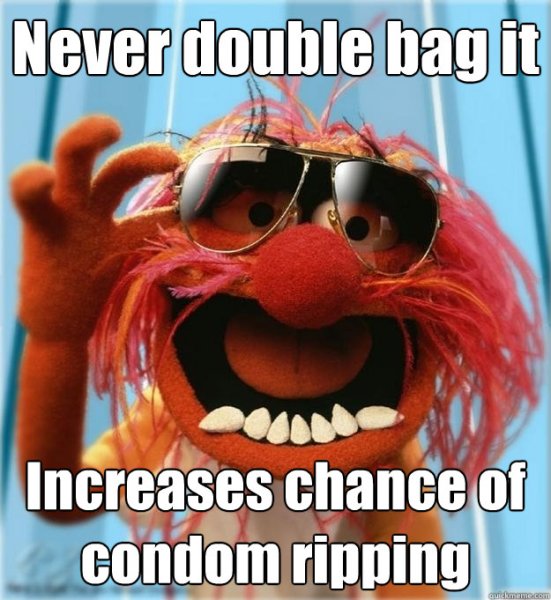 Molly: Are you gonna be double bagging your junk on our honeymoon?

I love me some New Girl, but this part was no bueno:

Jess: I’m going to go home with Oliver.
Schmidt: Great! Three words: double bag it.
Jess: I got that covered. These guys: hundie pack.
Schmidt: A hundred condoms? What, are you going to have sex with an army?

Caroline: Why are you wearing two coats?
Oleg: Same reason I wear two condoms: In case one breaks.

Kenny Fisher: I better double bag it. I don’t know where that girl been.

To be fair, two of those quotes are from characters that are portrayed as pretty ridiculous. I personally wouldn’t take sex advice from Oleg or Schmitty, but someone else might. Finally, a quote from a song that comes up surprisingly often on my iTunes shuffle:

It might seem like a good idea – if one condom is good, two must be twice as great! – but that’s not the reality. Condoms aren’t made to rub up against themselves – latex on latex equals friction, which can equal rips and microscopic holes that you might not see but bodily fluids will certainly take advantage of. It’s the same reason couples aren’t supposed to use male and female condoms at the same time.

Bottom line – just use one condom at a time! You’re wasting your money when you double-bag it for sex, because you have to buy condoms twice as often. Plus there’s all those expenses from getting an STD, HIV, pregnant, etc. I’ve also known people who wore two, but then would end up running out of condoms because they went through them so fast. So what did they do? Oh just skipped the condom altogether, thus negating the entire purpose of condoms. Use one now so you will have one later, that’s what I say! Also, please be sure to use a brand new condom for each sexual encounter, and carefully remove it immediately afterwards.

Just in case the message hasn’t been made clear enough…using 2 condoms at once makes you MORE likely to get an STD or unexpected pregnancy. Not less. MORE. So if you think someone is particularly dirty, don’t assume that an extra layer of latex is going to shield you from the nasty. Plus, Animal says not to, and he is clearly an authority on safe sex. That is all.