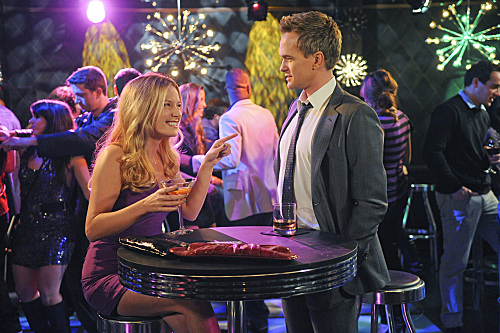 It is with a heavy heart that I report a change in my predictions…with each week it seems less and less likely that Barney and Robin will end up together. Yesterday I compiled a ridiculous amount of information in my quest to discover the truth, and then the new episode came along and supported my unhappy conclusion.

First – this Ted and Robin stuff is boring. I’m over it. I hope the writers are having him revisit each important relationship, so that he can move the eff on and never look back. Also (and I don’t think this will happen, thankfully) if it ends with some crappy “and even though I had seen her a hundred times before, I never truly saw her until that day at the wedding” I might have to cut a bitch.

Back to Barney and Robin…yesterday I realized that purple wedding flowers plus Lily’s pink dress could equal a bride other than Robin. And that brought on the sads for me, because I really, really like them together. And then last night, Quinn shows up in a purple dress. This show is beyond meticulous in terms of their attention to detail, and we already know that object colors have significance (yellow umbrella, blue French horn, etc). So, I wouldn’t be at all surprised if this was an early clue to Barney marrying Quinn. 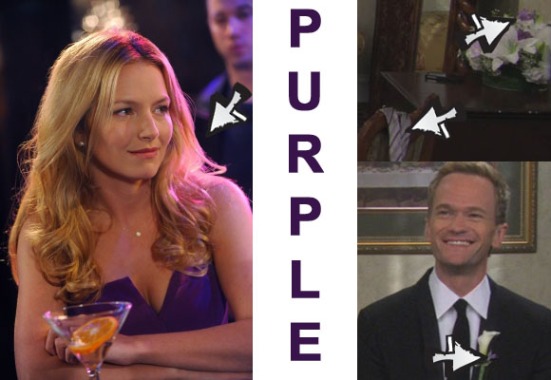 Speaking of Quinn…apparently Barney really doesn’t register the faces or personalities of strippers. I could understand if this was just a random stripper at a random establishment, but this is Karma! From the Lusty Leopard!

Barney: Some girl I slept with and screwed over is trying to ruin my life. God, why is this happening?!
Lily: It’s karma.
Barney: No, it’s not Karma, she’s stripping in Vegas…plus, we’re good.

So, clearly, Barney should have remembered her – or at least her rack! Come on Stinson, wasn’t it downloaded into your bank of bpeg images?

Also – Lily and Marshall are cute as parents, just like we expected. Goodbye Kevin, and good riddance. You were a nice guy but you tried too hard to be too nice and the chemistry just wasn’t there. I enjoyed the scenes where Robin shared her struggle with Lily, Marshall, and Ted. They rang true for me in a melancholy kinda way.

I’m so annoyed I will repeat it again – this Ted and Robin stuff sucks. How many times do we have to revisit it? I’m aware that we knew this was coming, but it doesn’t make me like it more.