Confession time – I think I’ve been mad at How I Met Your Mother. It’s silly, right? To be angry with a sitcom? But when I consider my feelings towards the show, I’ve just been burnt out on it. That’s a large part of why I took a summer break. There are still theories aplenty and mini reveals when they’re off-season, but I haven’t been interested. Until now. Simply put – I felt like the show had devolved to a NOT GOOD ENOUGH! point.

I’m not sure what turned the tides and got me back in the HIMYM game. I never intended to ditch the show altogether, of course, but I was struggling with the idea of devoting so much blog time to it. Here are some things that may have brought me back to my HIMYM happy place:

This video from San Diego Comic Con (NSFW unless on mute):

Seeing and hearing the kids go off was incredibly refreshing. I appreciate that the writers actually did address many of the concerns that fans have brought up. These also renewed my enthusiasm:

I know some people (many people?) dislike this actress as The Mother, but I love her. Look at these pictures!!! Look at how great they look together!!! She does look like a combination of Lily and Robin, but I’m okay with that. She even looks a little like Ted’s mom, which also works in the context of the show. If this woman is – in terms of personality – a combination of his three favorite women, of course he’s going to love her.

Also, look at these pics of the whole gang. LOVE: 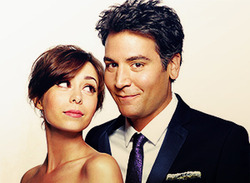 Before I move on to new posts about the show, I have to address my issues with it. Part of my frustration was this business about the entire season existing within the framework of one wedding weekend. I hate that. If any show can pull off flash forwards and flashbacks, though, it’s How I Met Your Mother. After investigating some of the links posted to the HIMYM season 9 spoiler page on Ted-Mosby.com, though, I’m feeling better.

This interview, for example, includes a quote that gives me a fair amount of hope:

Q) Now that we’ve met Cristin, will be seeing more flash-fowards with her this season?

Craig: I think season nine is going to have more flash-forwards than a lot of other seasons. We can’t say how or what they are, but it’s more of a flash-forward season than any before.

Carter: Without giving the context or how it happens, we’re going to get to see happily ever after. We’ll see that and there will be more tears.

I wasn’t really worried about flashbacks; they’ve always done those well on the show. But the flash forwards haven’t been so consistent, and this season is when they will matter the most. Frankly put, I will be pissed if we don’t get to see the development of the relationship between Ted and The Mother. I want to see their happily ever after, and the quote above indicates that we will see just that! Hooray!

My other issue has been the Ted/Robin/Barney love triangle. I’m sick of hearing about Robin and Ted, sick of seeing them almost kiss, sick of Ted thinking he’s in love with her over and over again. I guess it’s realistic, but I find it to be completely boring. 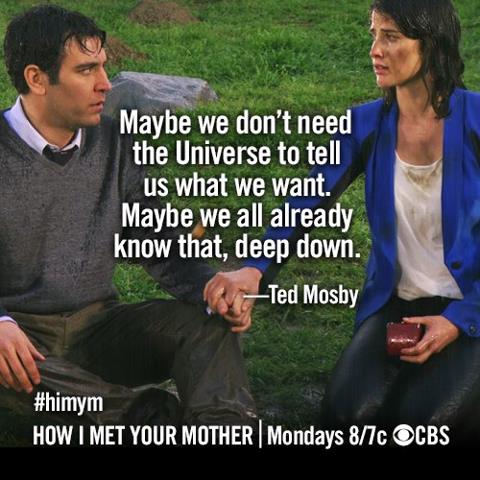 Robin IS a major part of Ted’s life, and a major force in shaping him into the man he is today. But she’s NOT the one that got away, or The One for him at all. Ted has become the annoying friend that doesn’t WANT to get over the wrong person. And Robin is that annoying friend that doesn’t really want a guy, but still sends mixed signals when she’s feeling insecure about her current relationship. I don’t want to hang out with either of those people!

So I did a fair amount of thinking about this ridiculousness, and here’s what I have come up with:

In terms of how Robin relates to Ted…she will always have a special place in his heart, because she’s the one that got him to a point where he was ready to settle down. Regular readers of my blog know that this concept annoys me – Ted met Robin AFTER he announced he was ready to settle down, which he did because Marshall proposed to Lily. The series didn’t start with Robin, and Ted didn’t become ready to commit because of meeting her.

BUT, his friendship, romantic relationship, and subsequent friendship with her DID get him to a point where he’s ready to commit. So in that sense Robin is absolutely essential to his love story with The Mother. That’s not even factoring in her wedding to Barney and the hiring of the wedding band.

The way this story (Ted and The Mother’s story) has played out shows us an important idea – Ted would have met The Mother even if the wedding never happened. I don’t know how it would work, but the universe has been overlapping their lives too many times for them to avoid meeting. The heart of this show is the concept that destiny will bring us love when we’re actually ready for it. There’s a huge element of free will required, of course, but there is an intangible force that brings meaning to otherwise random events.

So if we imagine that the HIMYM universe is real, but with different circumstances wherein Robin and Barney don’t end up together…given all of the near misses, I think it is inevitable that Ted and The Mother meet. Without Robin’s influence in his life, though, Ted might not be the man The Mother wants/needs/is attracted to.

That’s all a REALLY long way of saying that I think Robin’s significance is more related to Ted’s character development than the framework for meeting the mother. When you think of it that way, how in the world could Ted not treasure his friendship with Robin?

I think we will also see (if the show actually shows us enough ahead into the future, which is debatable at this point) how Robin helps Ted to man up and get over his moping and get ready to receive all the joys that life has to offer. I hope so at least.

Obviously a force like Robin could be intimidating to a new girlfriend. It would certainly be difficult for me to be 100% secure that there was nothing between them. At first, at least. I imagine with time I/she would see that he only has eyes for The Mother. But if we look at the group from an outsider’s perspective, think of what The Mother is meeting:

A happily married couple with a baby. (I’m ignoring any potential Italy/NY conflicts because we all know Lily and Marshall will be just fine). They obviously love one another and there doesn’t seem to be any indication of either being a cheater/okay with cheating.

A newly married couple with a non-romantic type of woman (obviously not what Ted is looking for) and a highly charismatic man. If I had just met Barney and Robin, my money would be on him being the cheater. He comes across as the one that is always the settler in his relationship, even though I think he is actually reaching to be with a woman of Robin’s caliber.

Ultimately, a man with two happily married couples for best friends is a good bet for commitment. I would be much more nervous if I met a guy and all of his friends were still single and possibly screwing around. The dynamic of this five person group begs for a sixth that will complete the third couple, don’t you think?

Speaking of the group adding a sixth, here’s the original crew plus one – Missy the goat! Perhaps she’s the one that Ted is truly destined to be with…

8 thoughts on “HIMYM Inspiration: Hasn’t Happened For The Longest Time (Thoughts on Season 9)”