I’ve been wanting to make a HIMYM mix for a while now, and I think I’ve determined the core base of songs to include. Despite my uuber-fan status, I’m sure I’ve missed some, so please comment with suggested additions! I tried to limit it to songs that are actually discussed and/or performed by characters on the show, because otherwise I would be overwhelmed with trying to find the entire soundtrack. If you’re seeking that information, though, be sure to check out How I Met Your Mother Music, which was very helpful.

More after the break – click “read more” at right!
The next set is a bit more self-explanatory…

*Per How I Met Your Mother Music, on the blog BeAwesomeInstead, there was more going on with Barney’s Get Psyched Mix than I realized. 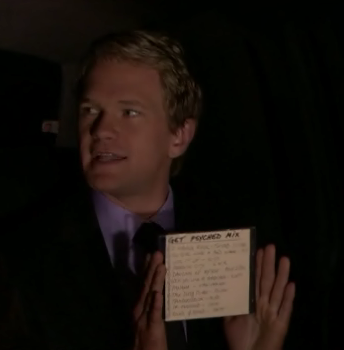 They explained it well, so here’s the direct quote:

There are actually 2 lists: One that was posted on Barney’s Blog, and one that is from the handwriting on the CD case that Barney holds in the episode.

1. You Give Love a Bad Name by Bon Jovi
2. The Humpty Dance by Digital Underground
3. Come Sail Away by
4. Don’t Stop Believin’ by Journey
5. The Transformers Theme Song by Lion
6. You’re the Best by Joe Esposito
7. High Enough by Damn Yankees
8. Jessie’s Girl by Rick Springfield
9. Rock You Like a Hurricane by the Scorpions
10. Hip Hop Hooray by Naughty by Nature
11. Change of Heart by Tom Petty
12. Run Run Away by Slade

1. I Wanna Rock by Twisted Sister
2. You Give Love a Bad Name by Bon Jovi
3. Lick It Up by KISS
4. Paradise City by Guns & Roses
5. Dancing With Myself by Billy Idol
6. Rock You Like A Hurricane by Scorpions
7. Panama by Van Halen
8. Talk Dirty To Me by Poison
9. Thunderstruck by AC/DC
10. Dr. Feelgood by Motley Crue
11. Round and Round by Ratt

3 thoughts on “How I Met Your Mother: The Musical Mega-Mix!”