I will preface this by saying that, so far, I’ve been enjoying Love Bites on NBC each Thursday. Each week has offered more and more actors that I already love, and the characters are easy to connect with. I didn’t love this scene, though:

Chloe: Why don’t you let yourself have some fun for once? You deserve it!

First off, and obviously, being fat does not somehow mean that you don’t deserve anything. You should have whatever your heart desires, or at least the chance to try for it. It’s damn un-American to say that someone doesn’t deserve something just because of their weight! (according to me, at least). But my second issue was that this line was spoken by a girl who is pregnant, which is NOT the same as being fat. At all. AND she isn’t even fat for being a pregnant lady – she probably weighs less than your average plus size women, even with eight months of baby inside. 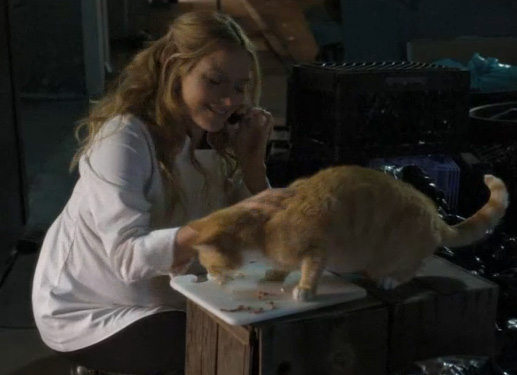 See above how she is NOT fat at the exact moment when she spoke that line. Just pregnant. And with a cat who will soon be fat if he keeps eating like that, but it’s ok cause he’s a cat.

I totally get that you could feel fat while pregnant. You do gain weight, and swell up, and your hormones make you insane. Plus this actress is actually pregnant, so I wouldn’t be surprised if those were her honest feelings. She has a right to them, but I guess I just feel like the quote was…irresponsible? Or maybe just indicative of a sad state of affairs, because it doesn’t seem like many people noticed or cared that she said that. But imagine if we replaced it with other characteristics:

I’m gay, I don’t deserve anything!

I’m black, I don’t deserve anything!

I’m divorced, I don’t deserve anything!

I’m hairy, I don’t deserve anything!

For what it’s worth, I was trying to choose two characteristics that you’re born with (gay and black) and two that you could presumably choose. You might be born hairy, but you do have the option of managing your fur. Just like people might be born with weight issues, but they have options to try to manage it. I would imagine that, anywhere in America besides my college city of Santa Cruz CA, a woman with really, really hairy armpits might be reviled in a manner similar to that experienced by a plus size lady.

Anyway, if someone on television said one of the statements above, people would probably notice. At least the first two, maybe not the others, but still. Is it just an accepted concept that fat people don’t deserve, well, anything?

I couldn’t figure out why the icy hot kept catching my eye but I finally saw it at this angle and it all came together #HotMess
A couple days late but necessary to share! When we go to weddings, we selfie.
THAT IS A 200 DOLLAR PLASMA SCREEN TV YOU JUST KILLED! Good luck paying me back on your zero dollars a year salary plus benefits, babe!