UPDATE: the season 8 episode “Ring Up!” officially, completely, absolutely disproved The Carly Theory. Barney’s sister is for sure NOT The Mother. Click here to see how the infamous Carly Theory has been disproven, plus a compilation of all the clues and theories about The Mother! 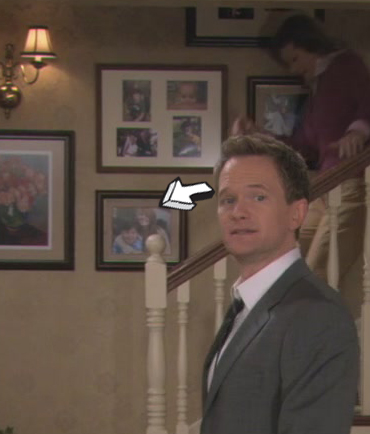 If she is, then the above picture appears to be the first photo where we can (sorta) see her face! That’s Jerome Jr in that picture, and he seems to be around the same age as he was in that episode. Maybe a couple years younger at most. The woman looks older than him, but not nearly as old as Cheryl (Barney’s stepmom). Plus, the whole headlock hugging pose is classic brother/sister.

Before we go any further – yes, I am quite aware that I spend way too much time on stuff like this. But you know what? It makes me happy!

If anyone agrees that this pic is probably of the mom, please help me find a better version of the screencap. It’s from the “Legendaddy” episode, and this is the biggest and highest resolution pic that I could find.

Since we still haven’t officially “met” Barney’s half-sister, it is entirely possible that she is the mother! From what I’ve seen online, this is the favorite theory among diehard HIMYM fans. Here’s why…

We haven’t met her yet – she is mentioned but never introduced.

-per Barney’s father, his daughter Carly is currently away at college.

-supporting evidence: Ted notes that his future wife was a student in the (incorrect) class that he tried to teach (Girls vs Suits).

-as noted in my post re the mother’s age, she is most likely NOT a 17-18 year old freshman when Ted is teaching the wrong class. The classroom is full of Economics 305 students, which sounds like an advanced level class to me. Also, Cindy (confirmed as the mother’s roommate) is a PhD candidate working on her dissertation. So the mother is probably at a similar point in her education.

-conclusion: If Barney is Ted’s brother-in-law by marriage, and that’s why Ted refers to him as “Uncle Barney”, then we can presume that Robin is “Aunt Robin” because she is married to Barney.

-alternate conclusion: Like many of us, Ted refers to close family friends as “aunt” and “uncle”.

-way out there conclusion: Barney marries Ted’s sister, despite her being married already to some guy that Ted doesn’t like.

She doesn’t live at home with her family.

-she could live near campus with her roommate Cindy, played by Rachel Bilson

There’s been a persistent rumor running around the interwebs about how Cindy’s apartment has a picture frame (I think?) that says C + C. This could refer to Cindy + Carly (= Best Friends 4Eva?) but it could also refer to the show’s creators, Craig Thomas and Carter Bays. From what I can tell, though, nobody has been able to find a screenshot or anything actually showing this elusive symbolic object. As such I don’t think it’s all that relevant.

I’m assuming Barney’s newfound extended family will be at the wedding. Why would Barney invite them? Any number of reasons, including impressing his dad, trying to best his little brother, trying to maximize the number of wedding gifts received, and bulking up his side of the pews to balance out all of Robin’s close Canadian friends and family.

Sidenote – I refuse to believe that Barney is marrying anyone other than Robin. They’re perfect for one another and I love them together and that’s what I have to say about that.

BUT Barney might not invite his dad and/or his stepmom and half-siblings. This would probably only occur if he was worried about hurting his mom’s feelings, or if she requested that they not come. She tries to be a good mom, though, so I don’t see that happening.

All of Cindy’s boyfriends fall in love with her roommate.

Granted, this might be because they can sense that she is more into the ladies than the gentlemen. But it could also be because her roomie Carly is just as charismatic, charming, and sexy as her big brother!

Cindy & The Mother’s apartment is decorated like Jerome & Cheryl’s house.

-Cindy & mom’s apartment is decorated with several ceramic animals (owl, camel, etc) and Jerome & Cheryl’s house is similarly packed full o’ ceramic animals, most notably cat figurines and an owl. Cindy’s & The Mother’s apartment also has a figurine of either a cat or dog with its ears folded down (probably a dog?). I know this is a stretch; that’s why I put it last.

Finally, I really want these to be pictures of the same dog, because then that would prove I was correct in my prior post “I’m 99% Sure These Are Pics of the Mother”. But I don’t think they are, so sad.

80 thoughts on “NEW Pic of the Mom – HIMYM – Does Ted Marry Barney’s Sister? UPDATE: NO”