You miss so much when you only check blogs on weekdays! I did my Monday morning perusal of my fave blogs today, and came across a lovely exchange relating to the phrase “Pooh-sized”. I was, before today, unaware of this term. I do not like it at all, mainly because that doesn’t call to mind Winnie the Pooh when spoken – just poo. And who wants to be poo-sized? Not me, that’s for sure. But apparently many people of the Disney enthusiast persuasion do, in fact, want to be called Pooh-sized. As an alternative to words like fat, chubby, obese, etc. Because Pooh is so fat? Or just because he has an insatiable addiction to the sticky icky (in this case, honey)? I truly don’t know.

It started with 2 posts on the aptly named Disney Kicks Ass blog. The first post was titled Too Fat To Ride, and the second post was titled I’m Just Going to Say It: This “Pooh Sized” Stuff is Bullshit. I tend to agree, albeit with the distinction that I don’t really care what terms anyone else uses for a personal description. If you want to equate your weight with a ursine cartoon character, you go right ahead. I will personally refrain from considering myself Pooh sized in any way. 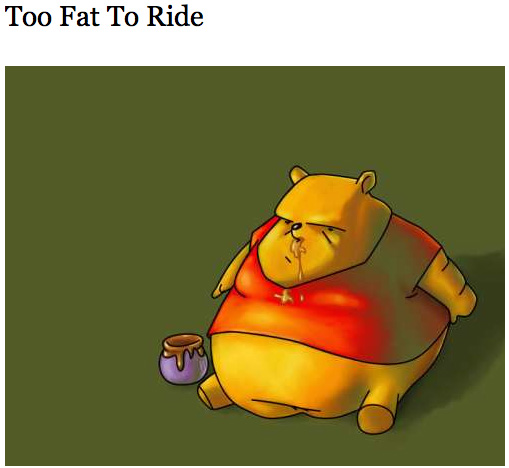 So then Jezebel covered that article, and author Dodai Stewart wrote her own article titled Disney, Fatphobia, & The “Pooh-Sized” Debate. Stewart didn’t really touch on the actual Pooh-sized thing too much, instead referencing the original author’s choice of words:

Listen, I love it when people celebrate their bodies and all that. But there is nothing cute about being morbidly obese. I am so glad that Disney accommodates people who are overweight (some parks don’t.) I want everyone to be able to ride Space Mountain and The Haunted Mansion. But let’s call it what it is. If you’re 5’5″ and weigh 200 pounds, you are obese. You might have high blood pressure or cholesterol, diabetes, heart disease, respiratory problems, gout, reproductive complications, bladder control issues, or psychological disorders or other serious conditions. That’s not cute, it’s scary.

The authors – Cheri and Lauren, per their website – do say some things that are poorly worded. I don’t think they are bad people, or even fatphobic people – they just write like they talk, and like they think. They think that a 5’5, 200 pound person is automatically an obese and unhealthy person, who is presumably about to drop dead. Chances are certainly good that the person in question is quite unhealthy, but it’s impossible to know that just from looking. Moreover, it’s impossible to know just from looking if the weight is a cause or a symptom of sad illness. But I get what they’re saying, and I don’t think they were being intentionally snarky. They further elaborated, stating:

Saying “You need to get help” or “You need to lose weight” isn’t necessarily insulting. Someone who says that isn’t saying you’re ugly or lazy or a bad person. They are expressing concern. Of course, this has to be done sensitively–it would be the same for someone who is morbidly thin. Sensitvely (sic) and seriously. Because it’s a serious thing. If you aren’t healthy, you’re sick, and you could live a short life. Mickey Mouse would not want that.

Here’s my issue with this portion of the post – nobody, and I mean nobody, is unaware of their morbid obesity. If you have an overweight friend, I promise that you do not need to inform them of this fact. Furthermore, they already know that they need to lose weight, and probably need help doing so. It is insulting, because it presumes that someone you have noticed something that the person didn’t see every time they look in the mirror. From what I understand, body dysmorphic disorder usually involves thinking that you are more overweight than you really are. Thus, it makes sense to approach an anorexic, because in her head, she isn’t morbidly skinny – or even skinny at all. I don’t think that most fat people – even compulsive overeaters – look in the mirror and see a skinny person.

This is where Stewart – author at Jezebel – really got to the point. She noted:

The point is: If you are an adult seriously invested in all things Tinkerbell, you shouldn’t be writing stuff like “If you aren’t healthy, you’re sick, and you could live a short life. Mickey Mouse would not want that.” Mickey Mouse is not real! And if he is, he welcomes the sick and the old and the fat and the thin and the rude like you, because he’s a symbol for the largest media conglomerate in the world in terms of revenue, and as long as you have cash, you are welcome in his Magic Kingdom, be you “Pooh-sized” or just a judgy Pooh-sized jerk.

I am in complete agreement with all of the above. First of all, you have to accept that your interest in how much Disney Kicks Ass will detract from your credibility, at least in some people’s eyes. To some people, you are delusional, sad, and desperately clinging to a lost childhood. To most people, though, you just love Disney. Point being, if you want to be taken seriously by the rest of the world, you shouldn’t close an argument with a WWMMD do type statement. But this blog is enjoyed mainly by Disney enthusiasts, I assume, so the phrasing was appropriate. If we are considering WWMMD (What Would Mickey Mouse Do), I’m pretty sure he would love him some fat guests. Really any guest that likes to eat is probably a-ok in Mickey’s book. But I felt like the level of snark was a bit much, considering that the original authors didn’t seem to intend to be rude or judgy. I think intent matters, but that’s just me.

The best part, though, is that Lauren and Cheri got really butt hurt about the whole thing. They posted – and then removed – a snarkload of an “apology”, which was of course cached by Google. You just can’t say bitchy stuff online unless you’re comfortable with it being there forever! This post was titled We’re Sorry About The “Pooh-Sized” Thing:

Lauren and I would like to apologize for forgetting that obesity is something that you just can’t talk about. You can talk about the dangers of other health hazards; you can even warn people not to smoke, not to drink when they are pregnant, or not to use illegal drugs. But you can’t mention the dangers of obesity – we’re sorry; we forgot about that.

We’d like to apologize for forgetting that if we did mention it in any way, no matter how little threatening, we’d be attacked. We forgot that the issue is too sensitive and can not be discussed rationally. We forgot that although any good doctor will urge an obese person to lose weight, we’re supposed to pretend that it is perfectly healthy to be obese. Maybe all those doctors are just fattists – who knows?

We’re sorry we’re too stupid and too “pixie dust brained” to even have commented in the first place, and would like to thank Jezebel writer Dodai Stewart for pointing it out. “The point is“, she said “if you are an adult seriously invested in all things Tinkerbell, you shouldn’t be writing stuff like “If you aren’t healthy, you’re sick, and you could live a short life. Mickey Mouse would not want that.” Mickey Mouse is not real!”  We’re sorry you feel that way, Dodai, but WTF? Of course Mickey Mouse is real. But again, we’re just stupid Disney enthusiasts – what do we know about anything not Disney related? ( a whole bunch of nothing, that’s what).

We forgot that if we bring up obesity in any way, shape, or form, out of the woodwork will come those who will not hear any opinion but their own and will shout down any that they don’t care for. We forgot.

Oh good Lord, I am drowning in the passive aggresiveness. Calm it down turbos, nobody is saying that you can’t talk about obesity. They’re saying that you don’t need to warn anyone about the dangers of obesity – doing so just makes you seem kinda snotty. You don’t need to “pretend that it is perfectly healthy to be obese”. You don’t actually need to pretend, or mention it, at all. That whole article would have been so much more interesting without the (seemingly) self-righteous, holier-than-thou schtick about fat people. Again, I don’t think that’s what Lauren and Cheri intended, but I do think that’s how it came across to many readers.

If you do want to bring up the issue of weight, as would be appropriate for this particular article, I would suggest omitting your personal opinions on what makes someone obese. Even if they are perfectly in line with what medical professionals say, it will still attract fury from the people of the interwebs. I’m not saying you can’t comment however you please, but you just have to be prepared for responses like the one on Jezebel if you do. This sentence is the part that really bothered me: “We forgot that if we bring up obesity in any way, shape, or form, out of the woodwork will come those who will not hear any opinion but their own and will shout down any that they don’t care for.” Here’s the thing – by posting this letter, and by going on the offensive, they are essentially refusing to hear any opinion but their own, and they are shouting down any that they don’t care for. Sooo basically all of us (myself included) are snarky bitches. :) Hopefully this will keep the issue of fatphobia, size discrimination, etc in the public eye, and maybe it will encourage women bloggers to be a bit more supportive of one another. I shall try to start right here!

4 thoughts on “A Pooh Sized Controversy”