We know who she is! Details below this hopefully spoiler protecting blurb :)I don’t know yet! I’m sorry if I got your hopes up for a moment. But there is a great chance we will find out tonight, and if we do, I will update this ASAP. Just remember I’m in California so I see it later than you cool kids on the east coast. Also I will put any definite mother info after this blurby so it won’t be a spoiler if you watch later.

But for right now we haven’t seen her, we don’t know her name, but we do know that Ted meets her at the Farhampton train station after Barney and Robin’s wedding.

UPDATE: We still don’t know her character’s name (besides The Mother) but we know the actress and we finally saw her!

What are your thoughts on this actress as THE Mother?

Need more clues in the meantime? I’ve got em all (and I really do mean ALL OF THE CLUES) right here…

The Mother Load of Mother Clues on HIMYM! 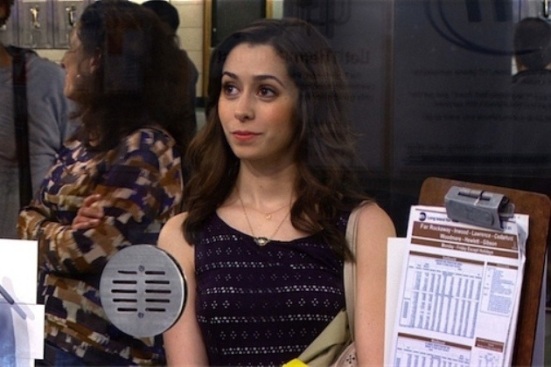 Thanks to Ted-Mosby.com for the image – be sure to click through and read their episode recap!

14 thoughts on “HIMYM Something New: And The Mother Is….”