I love my mom so, so much. Seriously, she’s awesome. Sometimes she says the most random stuff and it just makes me smile, because it’s such a Betsy thing to say. Case in point – she was checking out my blog, and suddenly she asked me if I had posted a rap. I assumed she was referring to one of my poems, but I was incorrect. My rap was, in fact, just the tag cloud:

But if anyone could turn it into a badass rap, it would be my mama! She also goes by names like Dr. Bet-Z, Jimi (as in Hendrix), and Z-Unit. So clearly she is familiar with the world of hip-hop. Lest you doubt me, please reference the following photo taken at Patrick Henry High School in I think 2001: 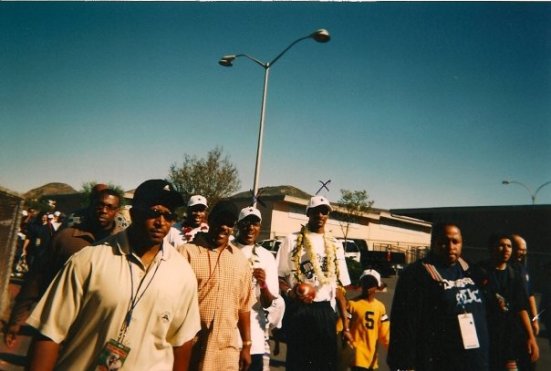 Snoop was there coaching his son’s football league, and he brought some of his friends with him. My mom mailed me the picture, complete with notes on the back with each person’s name. She also put those little X marks above key players, in case I wasn’t cool like her and able to identify Snoop et al. I put it in an album with a sticker that says “my homies” and it cracks me up every single time I see it. Also I’m not entirely sure how my mom managed this pic but I suspect it involved retrieving a VIP pass from a trash can. My mom is ballsy and does not hesitate to do awesome things like asking out men, squaring off against crappy neighbors, and somehow getting close enough to take this picture. I like to think that all of the guys in the shot are just thinking, wtf is this white lady doing here? (Being badass, that’s what!)

Edited because Betsy noticed that I did not include “DJ Dr. Betsy Dre” among the list of nicknames.